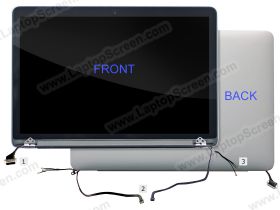 
Share this item via e-mail
Send link to customer

This is a general LCD replacement tutorial made by LaptopScreen.com. Not your specific model? Click here to search our video library for a model specific guide.


This is a guide on replacing an LCD screen on an Apple MacBook Pro 13".

As the battery for this laptop is not easily removable, you will need to make sure that the laptop is not accidentally powered on during the disassembly and installation process.

1. Tools you will need to for installing an LCD screen on a MacBook Pro 13":
-flat-head screwdriver
-philips screwdriver
-wide, flat tool such as a putty knife
-heat gun
-suction cup

2. The LCD panel is behind the front glass, which will need to be removed. The front glass is adhered with double sided tape, so we will be using a heat gun for separation. Start by moving the heat gun around the perimeter of the screen, being careful not to keep the heat in one position for too long. Keep the heat gun 1 to 2 inches away from the glass at all times. Apply heat for just under 2 minutes.

3. After applying heat around the screen's perimeter generally, focus heat in the upper left corner.

4. Place a suction cup close to the top left corner of the screen.

5. Next, insert the entire wide edge of the putty knife in the top left corner of the screen, between the glass edge and the black rubber gasket. Take care not to apply concentrated pressure on the glass, which can occur from the corner of the tool, and may shatter the glass. The putty knife should only be inserted about one millimetre.

6. Once the putty knife has been properly inserted, lift the handle up, applying force inward.

7. Using the suction cup to grip the front glass, work the putty knife through the glue, in order to separate the glass from the LCD screen.

8. If you feel the glue adhering too firmly, apply more heat using the heat gun.

9. Once the left side of the glass has been separated, insert pieces of plastic in the top left corner. The plastic pieces will prevent the glue from re-sticking.

10. Next, use the putty knife and heat gun to separate the glue from the top of the screen, using the same technique as you did for the left edge.

11. Be careful around the webcam, which is located in the middle of the top of the screen, and is connected with two pins, that are glued to the underside of the glass.

12. When you work your way to the right corner, and have it separated, insert a piece of plastic between the glass and the LCD screen.

13. Use your fingers to apply outward pressure, moving the front glass away from the LCD screen, and applying heat from the heat gun to the bottom edge.

14. Remove and set the front glass aside.

15. Using a screwdriver, remove the 4 identical LCD screws. There is one screw located in each of the 4 corners.

16. Then, remove the two smaller screws, which are located in the lower middle of the screen.

17. Once all screws have been removed, lean the panel forward and gently pull up, in order to expose the video connector.

18. The video connector is held in place by a piece of black tape, which can be removed at this point.

20. The LCD screen can now be removed.

21. Take out the new MacBook Pro 13" LCD screen at this point, removing the protective cover.

23. If you possess neither small fingers nor extreme patience, we recommend the 2nd option for installing your LCD screen. First, the back cover of the laptop will need to be removed. There are 10 screws to be removed—4 each on the top and the bottom edge, and 1 on each side.

24. Use a flat-head screwdriver to unlatch the video connector from the mother board.

26. Next, remove the 2 screws from the black t-shaped piece, which is in the way of the video connector.

27. You will now have about an inch of slack on the video connector cable. This will make connecting the LCD screen much more pleasant. Push the cable through toward the hinge.

28. Flip over and open the laptop. Pull out the video connector cable about half an inch.

29. Place the LCD screen on the back cover, aligning the connector with the cable. Using a pick or flat-head screwdriver, re-connect the video connector cable, and latch the connector bracket.

30. Place the black tape back on the video connector, next.

31. After that, slide the LCD screen in place.

32. Close the laptop and turn it over so the bottom is exposed. Attach the 2 fastening pieces by replacing the 3 screws.

33. Re-connect the video connector cable to the mother board at this point.

34. Place the back cover down, and replace the 10 screws.

35. Before proceeding, it is a good idea to test the connections by turning on the Apple MacBook Pro 13" laptop. Simply press the on button.

36. Once you see the Apple logo, press down the button again to cancel start-up.

37. Now that we have verified that the laptop is powering on correctly, replace the 6 LCD screws from around the edge of the screen.

39. Using the heat gun, apply a bit of heat to the edges to re-activate the glue.

40. Next, squeeze the front glass, LCD screen and cover together.

41. You're done! The laptop can now be powered on as usual.