Backlight failure due to blown fuse

Thousands of people replace their LCD screens every month, and in 99.9% of cases their installation goes smooth. But, in some cases, issues like dark back light, or otherwise known as the screen not lighting up do seldom occur. These quirks stem from two most common errors people make when installing their LCD.

LaptopScreen.com recommends removing all sources of power before proceeding with an LCD installation, those include the battery and the AC power. The new LED screen equipped laptops supply phantom power to the screen even in the "off" position. So whenever possible, always try to remove all power. And when that is not possible (or would cause so much more hassle, that it makes the installation job unfeasible) it is extra important to be careful with disconnecting and reconnecting the video cable.

Since the LED screens typically get their backlight power through the 40-pin connector, it is imperative that the connector is not slanted during disconnection and reconnection. Use both hands to slide it out as straight as possible. And when reconnecting the video cable back, obviously make sure to not plug it in reverse - it will not work that way, but you may short the pins 38 through 40, and your backlight may get damaged. Be patient and observant.

But what exactly happens when the backlight power is shorted? Most laptops actually foresee such a possibility, so they come equipped with a fail safe - a little fuse which guards pin 40 against the common ground. This fuse can be located near the LVDS port on the motherboard (where the video cable plugs in), and once located, it can be diagnosed with a continuity meter (multimeter on continuity setting).

The way fuses work, is that they have a small copper filament, almost like a light bulb, which is rated to allow a certain amount of current through it - a typical backlight fuse = 32v@3amps. When the power coming through exceeds that rating - like when the pins are shorted, the current will equal to the ability of the power supply/battery (up to 40 amps peak) and the small filament in the fuse bursts and stops the electricity from traveling through to more sensitive components like the video card.

So if you have a dark backlight issue, you are likely in possession of a blown fuse, at this point the fuse can be located, tested with a multimeter (or an LED+battery+couple of wires), and if the fuse does not let through any electricity you have an option to replace the fuse, or to jump it (jumping fuses - replacing with non rated filament, aka solder blob, will annul the fail-safe) 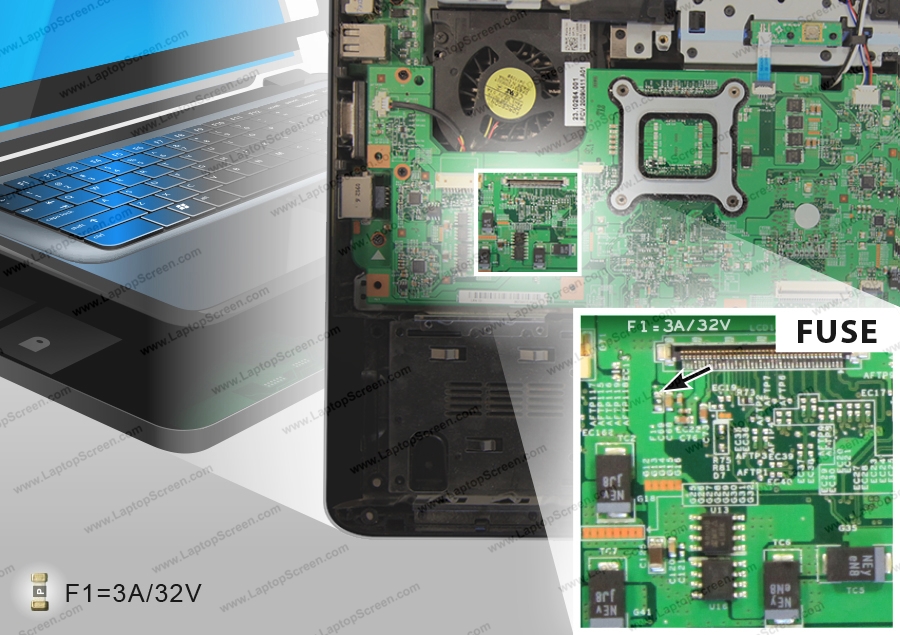